YOU ARE HERE:  Operation Noah > Science

Operation Noah has released a report that makes recommendations on ways to reduce and store carbon emissions to one of the country’s largest landowners, the Church of England, which owns approximately 0.5% of the UK’s land. The report is also relevant to other UK Churches and Christian groups, estimated to own another 0.5% of the UK’s land. 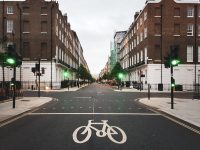 While all eyes have been turned, for the last five months, to the Covid-19 pandemic Bill McGuire, Professor Emeritus of Geophysical & Climate Hazards at UCL and a regular guest blogger for Operation Noah, has noticed that news about global heating and resulting climate breakdown has been coming thick and fast.

Hardly surprisingly, most of the news about global heating and climate breakdown has been bad recently – some very bed – but there have also been small nuggets of good news hidden amongst the gloom.

Every cloud, even the darkest, has a silver lining. As much of the world went into lockdown during March, so transport and much of industry and commerce ground to a halt. The welcome result was a sudden fall in air pollution and carbon emissions. Despite easing of lockdown, the International Energy Agency calculates that global emissions for 2020 could be down by as much as six percent, which would wipe out the growth in emissions over the last five years or so.

This is a figure not to be sniffed at, but it needs to be considered in context. To avoid catastrophic climate change, emissions must fall by around 7.5 percent every year for the next decade. The rather depressing reality is, therefore, that even a global pandemic has not been sufficient to bring about emissions reductions on the scale that we need. Still, it is a welcome hiatus, and one that we need to make the most of by pushing for a ‘new normal’ that is far greener than the old.

Meanwhile, the vast quantities of carbon we have already pumped into the atmosphere have continued to play havoc with the weather and climate systems. During June, temperatures in the Siberian Arctic reached an all-time record high of 38°C, driving wildfires across millions of acres of tundra, which released vast quantities of soil carbon into the atmosphere. In fact, Siberia has been baking in unseasonal heat since January, marking a heatwave that a new study by the UK Met Office confirms, would have been impossible without human-induced global heating. Not to be left out, Antarctica also recorded its hottest ever day in February, when the temperature in West Antarctica touched a balmy 20.75°C.

There has been more bad news from down under too. New research looking at past warming episodes – published in the journal Science –reveals that the colossal floating ice shelves that encircle much of the Antarctic landmass, are capable of sliding into the sea five times faster than they are at present. This means that as our world continues to heat up, so these ice shelves could start disappearing at a rate as high as six miles a year. It is a sobering fact that, the last time the ice shelves retreated at this rate – around 12,000 years ago – sea levels were climbing at an astonishing six centimetres a year, which is 12 times the current rate.

Probably the most disturbing news came courtesy of new modelling undertaken for the Intergovernmental Panel on Climate Change (IPPC) 6th Assessment, due out next year. There is an almost magical number in climate change science, which is the value of so-called climate sensitivity. This, in simple terms, is the amount the planet will eventually heat up if the concentration of atmospheric carbon dioxide is doubled from pre-industrial times, when it was around 280 parts per million (ppm). In other words, 560ppm. Originally thought to be around 3°C, the latest models suggest that the worst-case figure for climate sensitivity could be as high as 5°C, which is a terrifying finding.

Atmospheric carbon levels are currently around 417ppm, and before the pandemic lockdown they had been climbing at about 2.4ppm a year. If we get back to this rate once Covid-19 dies back, then a doubling of atmospheric carbon dioxide could be achieved as soon as 2080. This would lock in an eventual global average temperature rise great enough to bring our civilisation to its knees.

This is, it has to be said, a worst-case scenario, and an even more recent study – the results of which have just been released – argues that climate sensitivity is more likely to lie between 2.6°C and 3.9°C. This is less bad news, but still very bad. Furthermore, past experience has shown that global heating and climate breakdown observations typically meet, and often exceed, earlier worst-case predictions.

Two for the price of one

I started off this post with some good news, so let’s end with another optimistic story.

New analysis, published earlier this month in Nature, demonstrated that sprinkling rock dust on farmland – on a big enough scale – could capture as much as two billion tonnes of carbon a year. This rather simple method works because as the rock dust – common basalt is best – weathers, so it absorbs carbon from the atmosphere and locks it in. The method is also relatively cheap and fertilises the soil at the same time.

Of course, two billion tonnes is only about one twentieth of current annual carbon emissions and it would require a huge and co-ordinated international effort to accomplish. However, barring the unlooked for Covid-driven emissions cuts, it is the first positive news on the climate front in a very long time. It also flags the fact that, while we may be in desperate straits, there are always approaches we can take to begin to challenge global heating and catastrophic climate breakdown. That is, if we really want to.

Bill McGuire is Professor Emeritus of Geophysical & Climate Hazards at UCL and author of Waking the Giant: How a Changing Climate Triggers Earthquakes, Tsunamis and Volcanic Eruptions. He was a contributor to the IPCC 2012 report on climate change and extreme events and disasters. His new book, SKYSEED, an eco-thriller about climate engineering gone wrong, is published in September.