YOU ARE HERE:  Operation Noah > News and events > News > Churches urged to divest from fossil fuels and accelerate the clean energy transition

PRESS RELEASE: As the Church of England prepares to vote on fossil fuel divestment, a new report from Operation Noah, the Christian climate change charity, looks at the role of the Churches in the transition from fossil fuels to renewable energy.

The report, Fossil free Churches: Accelerating the transition to a brighter, cleaner future, argues that the speed of transition needs to accelerate rapidly in order to keep temperature rises in line with the Paris Agreement. To accelerate the transition to a net zero carbon economy, Churches (and other investors) need to rapidly shift their investments from fossil fuel companies and reinvest in clean alternatives.

The report highlights the gap between words and action from oil and gas companies in responding to the risks posed by climate change. While the major oil and gas companies publicly support the Paris Agreement, they continue to use scenarios for business planning that are consistent with 3-5°C+ of warming.

At Shell’s AGM last month, only 5.5% of shareholders supported a resolution calling on the company to set carbon emission reduction targets in line with the Paris Agreement, leading to questions about whether the engagement approach will succeed in bringing about change at the speed required.

James Buchanan, who works on Operation Noah’s Bright Now divestment campaign, says: ‘We hope this will be a useful resource for anyone who wants the Church to take a leading role in bringing about a brighter, cleaner future. It is time for Churches to get out of the problem and get into the solution by divesting from fossil fuels and increasing their investments in renewable energy and clean technologies – bearing witness to their own congregations and the whole of society about the future they wish to see.’

The report is published as the Church of England prepares to debate the question of divestment at General Synod in July. A motion calling for divestment from any oil and gas company that does not bring its business investment plans into line with Paris Agreement targets by 2020 passed the Oxford Diocesan Synod in March. However, General Synod will not be considering Oxford’s motion, but a weaker one submitted by the Church’s National Investing Bodies; members of Oxford’s delegation to General Synod have submitted an amendment aimed at strengthening this motion. 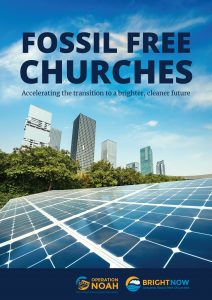 Copies of the Fossil free Churches report are available to download at http://brightnow.org.uk/resource/transition-report. Hard copies are available on request.