Press release, 20 August 2012: When comedian Paul Kerensa was asked to write a show devoted entirely to climate change his first thought was to drive away – very fast.

‘But all that carbon emission isn’t good for the environment,’ quips Paul. ‘Climate change is quite dry (forgive the pun) as far as comedy’s concerned. Anything involving the death of ecosystems doesn’t strike you as “laugh a minute”’.

In spite of initial reservations, Paul has become comedian in residence for Operation Noah, the Christian climate change pressure group. Paul will present his show at this month’s Greenbelt Festival over the August bank holiday weekend, and his embryonic act can also be seen on YouTube.

In a ‘Brief History of Climate Change’, Paul touches on God as creator (sleepless after forgetting to make curtains at the end of the first day), Adam and Eve, Noah and the Flood. He relates the story of Jesus calming the storm on Lake Galilee as ‘the first example of man-made climate change.’

Another landmark was Gutenberg’s first printing press in 1440. ‘He was originally going to launch it in 1439,’ says Paul, ‘but saw a note saying “Do you really need to print this?”’ 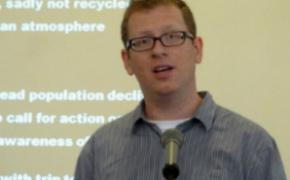 Paul, who makes a living writing jokes for TV and radio shows like The News Quiz and The Now Show, tackles everything from over-consumption, Top Gear and Jeremy Clarkson to G8 summits and the impact of rising sea levels. ‘We’ll be just a bit further from France,’ he says, ‘so it’s not all bad.’

Ruth Jarman, of Operation Noah’s communications group, hopes comedy will circumvent the denial psychology that comes into play when people are faced with the implications of climate change.

‘Humour allows us to engage people who have not thought through the issues,’ explains Ruth. ‘Climate change should not be a “green” issue, it should be the concern of everyone.’

Operation Noah are encouraging churches to use the YouTube highlights of Paul’s presentation as a resource during this year’s ‘Creation Time’ in September. The charity has a number of relevant resources for use during services in September, based around their Ash Wednesday Declaration, launched in February 2012.