YOU ARE HERE:  Operation Noah > News and events > Comment > Defeat is not an option in the battle against climate change

Defeat is not an option in the battle against climate change 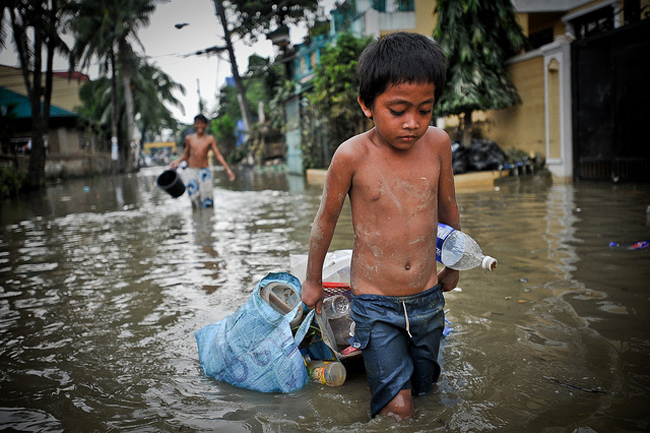 In the aftermath of Typhoon Ketsana (Ondoy), a boy drags some possessions through the flooded streets of Metro Manila. Photo by ADB (CC BY-NC-ND 2.0)

It was an article by Adrian Hastings that changed my life. In Beware Apocalypse (Tablet, 8 January, 2000), the theologian Adrian Hastings was one of many voices urgently alerting us to the likelihood that we were on the road to catastrophic climate change. What sort of world would my grandchildren grow up to live in? I’ve been working ever since to add my voice to the urgent need for action.

In 2000, the world was watching to see whether the 1997 Kyoto Protocol signed by developed countries under the United Nations Framework Convention on Climate Change (UNFCCC) would succeed in getting global warming under control. Their pledge was to reduce global emissions of greenhouse gases to 1990 levels by 2008–12.
We haven’t managed that, though many countries have taken some action. The United States refused to ratify the protocol. Emissions from developing countries, especially China’s, have significantly grown. Adrian Hastings’ alarm would be much more serious now.

In May 2015 the Pope’s encyclical Laudatio Si – On Care for Our Common Home gave a very comprehensive and critical overview of the situation and issued a call to action, which he has repeated more than once.

Seeing the effect of climate change

The climate has been worsening in the last 17 years and floods, droughts, wildfires have multiplied in many parts of the world. Hurricanes and other such storms have increased in intensity as Hurricane Irma has recently demonstrated. Ocean acidity has strengthened, which affects fish stocks and other food security. Together with the diminishing availability of fresh water this could lead to conflict in years to come and further increased mass migration.

The increasing average surface earth temperature is producing more and more heatwaves all over the world year by year. Temperatures in the 50 C’s are becoming common and we are reaching the stage when these temperatures in certain countries will make it impossible for people to work. Our bodies can only stand a certain amount of heat and if they stay at a high temperature for too long we die.

The UN has been monitoring progress, or lack of it, over the years. It engages all the signatories of the UNFCCC in yearly meetings called the Conference of Parties (COP). At the 2009 meeting in Copenhagen the world had expected a new agreement to be signed by all nations. All that was agreed was to ensure that the post-industrial world average surface temperature should not exceed 2 degrees C. A rise more than that would have dire consequences for the habitability of the planet.

Eventually, at COP21 in Paris in December 2015, 195 nations – then including the USA, though Donald Trump has later said he will renege on that – agreed to achieve a stabilisation of greenhouse gas concentrations some time between 2050 and 2100. To achieve this the Parties undertook to keep world temperature well below 2 degrees C, and aim to limit the increase to 1.5 degrees C . They also agreed on the need for global CO2 emissions to peak as soon as possible.

However, when the countries to that agreement submitted to the UN their national intended commitments (iNDCs) to reduce carbon emissions, it became clear that even if these voluntary commitments were kept, they would not be sufficient to keep the world temperature below 2 degrees C. More urgent action is clearly needed.

At present, greenhouse gas emissions in the atmosphere are over 400 parts per million (ppm), whilst over the previous 800,000 years (from ice-core measurements) they varied between 180 and 280 ppm. What is more they still have not peaked and are increasing by over 2 ppm per year. In fact 85% of all emissions caused by humankind have occurred in the last three decades.

It will be the task of the Intergovernmental Panel on Climate Change (IPCC), the body set up by the World Meteorological Organisation (WMO) and the UN Environment Programme (UNEP) in 1988, to review the science behind plans to put the Paris Agreement into effect. They will report in September 2018 and indicate what nations need to do to at least keep global warming from exceeding 2 degrees C.

The IPCC is known to be conservative in its judgements. Global climate models have many limitations. Local dynamics come into play: in the Arctic and Antarctic the temperatures are already respectively 5 and 3 degrees C above pre-industrial levels. Increasing heat stored in the oceans could feed back to the Earth’s atmosphere with large scale impacts.

What is worrying is that although the Paris Agreement was acclaimed by the world, as 195 nations finally agreed a course of action, it was also criticised because the commitments of the signatory nations are voluntary and non-binding and these commitments will only be monitored by the IPCC every five years. The target of 2 degrees C remains an aspiration and not a binding agreement. There are no sanctions against countries who fail to meet their targets.

So what is to be done?

The need for decarbonisation

The world needs to move to renewable energy as soon as possible and leave the remaining fossil fuels in the ground. However, the G20 nations are not helping the situation by giving fossil fuel producers big subsidies, often four times more than those given to renewables.

Christiana Figueres, former Executive Secretary of the UN Climate Change Secretariat, acting with a group of colleagues, sent the recent G20 meeting a six point plan to ensure emissions peak by 2020 so as to meet the goals of the Paris Agreement. In brief these are:

There was no mention of this in the G20 final statement.

Thankfully there is some encouraging news. We have seen, only in the last few years, an increasing number of records for renewable energy. The UK and Germany have had ‘renewable surplus’ days when the entire electricity demand for the country was met by renewables. One of the major coal companies has gone bankrupt as the future is clearly not coal – this is just economics and not politics. If this energy transition continues then the dire forecasts of global warming over 2 degrees C could become a bit less likely.

The aim of the Paris Agreement is to avoid average world temperature reaching 2 degrees C above pre-industrial levels, but more and more scientists now think that even 2 degrees C is a dangerous temperature and what will need to be done is to reduce the CO2 in the atmosphere from the present 400ppm to 350ppm as soon as possible.

Dr James Hansen, a climate scientist – formerly of NASA – has suggested that this could be done by a rapid reduction of emissions and via improved agricultural and forestry practice, including reforestation and steps to improve soil fertility and increase its carbon content.

He and many others think we will need not only a massive reduction of emissions to reduce the temperature but to remove atmospheric CO2 to achieve 350 ppm. At present there is no way of doing this and the cost would be tremendous.

Whilst the reduction of emissions and of atmospheric CO2 are crucial, if we are to stabilise the climate, there are other things that must not be neglected.

For example, to pursue economic growth as the supreme political priority is to make the reduction of emissions much more difficult. Industrial nations use an enormous amount of energy and it’s been suggested that reducing the world’s energy supplies would downsize many industrial processes, so most of the business world would probably oppose this. So we need a major change in our political priorities.

Richard Heinberg of the Post Carbon Institute has written: ‘Society is addicted to growth, and that’s having terrible consequences for the planet, and increasingly for us as well.’ He also emphasises that if we are going to succeed in stabilising climate change we are going to have to deal more effectively with other ecological dilemmas such as overpopulation, species extinctions, water and air pollution and loss of topsoil and fresh water.

It was 17 years ago that Adrian Hastings drew attention to the need for urgent action. Now the situation is even more urgent, and action is needed as quickly as possible or we will lose our battle to avoid runaway climate change with its horrendous consequences. As Bill McKibben of 350org. has repeatedly said of our present rate of tackling the problem: ‘Winning slowly is just a different way of losing.’

The COP24 meeting in December 2018 in Poland may well be the last opportunity for the nations of the world to agree a course of action that could deal with our present situation. This will have to be much more drastic than what is at present contemplated both in timing and the actions required.

The climate is changing more rapidly than predicted and added to this there are many imponderables, which makes it vital that we lobby our MPs and the Government now to take whatever action is required on a national, as well as on a global scale at the COP meetings this year and next, to ensure we avoid irreversible climate change. The survival of humankind depends on this.

An edited version of this article previously appeared in The Universe.