YOU ARE HERE:  Operation Noah > News and events > News > Pressure mounts on Church of England to divest from Exxon

Pressure mounts on Church of England to divest from Exxon

PRESS RELEASE:  Christian campaigners are calling on the Church of England to disinvest from US oil giant ExxonMobil, on the basis of new evidence that the company intentionally misled the public on climate change.

Last night (Wednesday 20 September), supporters of Operation Noah and Christian Climate Action held a vigil outside Church House in London, the home of Church of England investors, to pray that they would cut financial ties with Exxon.

A recent peer-reviewed study published by Harvard academics shows that ExxonMobil knew about climate change in the 1970s, yet its public communications intentionally cast doubt over whether climate change was real and caused by human activity. ExxonMobil is currently under investigation by the Attorneys General of New York and Massachusetts, as well as the FBI, over whether the company misled the public about the risks of climate change.

Ruth Jarman of Christian Climate Action said: ‘As tragic extreme weather events across the world highlight the consequences of inaction on climate change, we wanted to shine a spotlight on a company which we now know is responsible for at least some of this inaction. It cannot be right for a church, which should be providing moral leadership, to ignore Exxon’s gross corporate social irresponsibility.’

James Buchanan of Operation Noah said: ‘We believe that the Church of England should immediately divest from ExxonMobil. The ethical grounds for divestment are now overwhelming. The possibility that, following recent extreme weather events in the US, oil companies may face climate lawsuits also means that investors should divest now or face the risk of significant financial losses.’

Revd. Dr. Darrell Hannah, rector of All Saints’, Ascot Heath, said: ‘It is now clear that ExxonMobil engineered a thirty year campaign to mislead the public on the scientific evidence for climate change. Their current business plan for the coming decades, while acknowledging that climate change is real and dangerous, proceeds with a business-as-usual approach. The Church of England, by continuing to invest in ExxonMobil, participates in their reckless exploitation of God’s world. It is time for the Church to take its money elsewhere. Anything less would mean failing to live up to our prophetic calling.’ 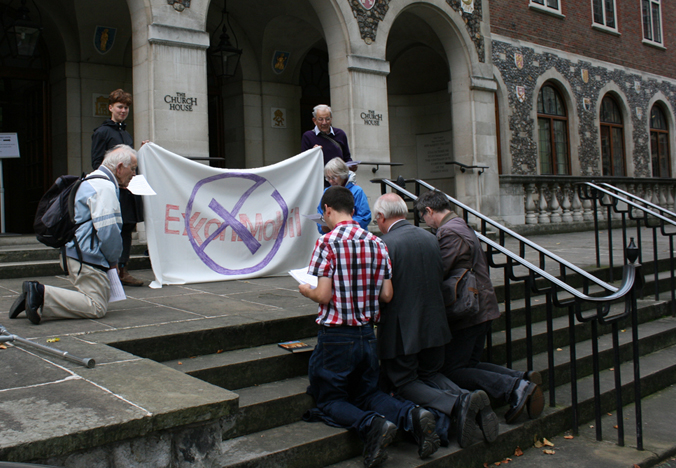